Wall Street investors are sure a fickle crowd these days.

After dropping 16% between April 23 and July 2, the S&P 500 recouped one-third of that loss last week and rose 5.4%, according to Bloomberg, July 10. Stocks rose on news that U.S. retail sales grew at the fastest pace in four years in June and a bullish report from the IMF projected an upwardly revised global economic growth rate of 4.6% in 2010, according to CNBC, July 8. Rising optimism that second quarter earnings reports might be better than expected also supported stock prices last week, according to MarketWatch, July 7.

Although the market jumped dramatically, has much changed in the past week? Maybe, maybe not. Wall Street observers have a tidy tendency to explain every movement in the market with an explanation that seems, on the surface, to be reasonable. Last week’s bullish reports on retail sales, world economic growth, and some earnings pre-announcements all seem like logical explanations for the big rise in the market. However, between April 23 and July 2, when the market dropped 16%, we were reading reports that retail sales were weak, economic growth was slowing, and we might be heading for a double-dip recession. Now, a week later, the economy seems to have turned a corner, right?

In reality, the truth is probably somewhere in between. The economy may not have been as bad as the 16% market swoon suggested and it may not be as good as last week’s 5.4% pop suggests, either. It’s good to stay informed but we have to filter information with a dose of skepticism.

DOES THE LARGE U.S. BUDGET DEFICIT MATTER?
Below is a chart of our annual budget surplus/deficit for the past few years. 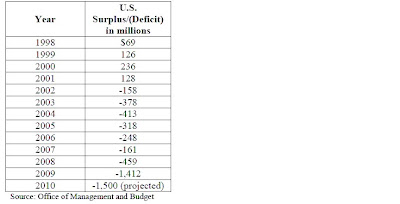 Notice how our budget deficit has soared over the past three years as the recession took its toll. Surprisingly, it was just nine years ago that we ran a budget surplus of $128 billion. On a cumulative basis, the national debt is $13.2 trillion, according to the Treasury Department. So, should we be concerned that our annual deficit and national debt are rising dramatically?

Without meaning to be glib, deficits don’t matter until they do. Just ask Greece.

Currently, financial markets are relatively unconcerned about our debt level. Investors’ lack of concern shows up in the fact that interest rates on government bonds are near historic lows and the spread between interest rates on inflation-protected Treasury bonds and regular bonds is a mild 2.3%, according to MSN, July 9. If investors were concerned about our debt level, they’d send interest rates skyrocketing (as happened in Greece) and inflation might rear its head if the government cranked up the printing press to monetize our debt.

Investors are not alarmed at our large debt level because they still have confidence that our country will weather the storm. However, investors could lose confidence if, for example, we experience some new shock or a “failed” Treasury auction. If that happens, confidence could dissipate rather quickly and throw our economy into disarray.

Nobody knows if this will happen or not, but we continue to monitor interest rates and inflation expectations as early indicators to help determine if confidence is slipping.

* The DJ Global ex US is an unmanaged group of non-U.S. securities designed to reflect the performance of the global equity securities that have readily available prices.
* The 10-year Treasury Note represents debt owed by the United States Treasury to the public. Since the U.S. Government is seen as a risk-free borrower, investors use the 10-year Treasury Note as a benchmark for the long-term bond market.
* Gold represents the London afternoon gold price fix as reported by the London Bullion Market Association.
* The DJ Commodity Index is designed to be a highly liquid and diversified benchmark for the commodity futures market. The Index is composed of futures contracts on 19 physical commodities and was launched on July 14, 1998.
* The DJ Equity All REIT TR Index measures the total return performance of the equity subcategory of the Real Estate Investment Trust (REIT) industry as calculated by Dow Jones.
* Yahoo! Finance is the source for any reference to the performance of an index between two specific periods.
* Opinions expressed are subject to change without notice and are not intended as investment advice or to predict future performance.
* Past performance does not guarantee future results.
* This newsletter was prepared by PEAK.

* You cannot invest directly in an index.
* Consult your financial professional before making any investment decision.
By Kevin Kroskey, CFP, MBA
Email ThisBlogThis!Share to TwitterShare to FacebookShare to Pinterest