2016 First Quarter Report: The Bear That Was Not

The first quarter of the New Year has brought us small positive returns in many of the U.S. market indices, which means that investors survived the worst 10-day start to a calendar year ever for the U.S. stock market.

The easy call at the beginning of the year would have been to bail out when the markets were declining and sit out the widely predicted start of a painful bear market. However, 10% market declines are simply a part of normal market volatility, and anyone who lacks discipline and panic-sells is likely to miss the subsequent gains in addition to having a bad investing experience.

Since hitting their 2016 lows on February 11, the S&P 500 has gained roughly 10% in value while Emerging Markets nearly 17%. See below for total returns of widely used market indices. 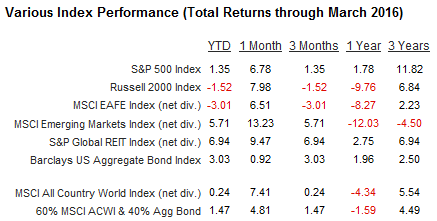 This does not guarantee that there will be gains going forward, however. Half of the S&P 500 sectors are reporting declines in earnings per share this quarter over the same period last year, and a poll by the FactSet analysts suggests that seven out of the ten sectors will end the earnings season reporting declining earnings.

Meanwhile, interest rates have continued their volatility but have drifted downward over the quarter, leading to gains in bond portfolios. The 10-year U.S. treasury began the year at 2.28%, reached a low of 1.57% on February 11th, and stands at 1.79% as of quarter-end.

Part of the wind at the backs of stocks has come, yet again, from the U.S. Federal Reserve Board, which had originally signaled that it planned to raise interest rates four times this year. After its most recent meeting, the Fed is projecting just two interest rate hikes this year, and Fed Chairwoman Janet Yellen has clearly indicated that the Fed will remain cautious about disrupting the markets or the economy as it unwinds its various easing initiatives.

Another tailwind was provided by the falling dollar. In the first three months of the year, the dollar’s value against a basket of six major currencies fell 4.2% — a boon to international investments. (A weaker dollar has a positive currency impact for US-based investors holding international equities.)

In the U.S., employment growth has remained strong, with 215,000 new jobs added in March, above predictions of 199,000. Overall, the economy has added millions of jobs in the last two years. Wage growth continues to be low—up 2.3% today over a year earlier—but while that is discouraging for workers, companies and their stock values have been benefiting from relatively cheap labor.

Will the market go up or down from here? I once heard someone say the market always goes up except for short albeit sometimes extreme downturns. This certainly has been true of the history of the U.S. market.

We cannot predict the future; indeed, even the present is hard to understand. Our mission as investors is to hang on and allow the millions of workers who get up every morning and go to work to do what they do best: incrementally, hour by hour, day by day, week by week, grow the value of the companies we own with their efforts. Investors will spook and sometimes flee stocks, driving their prices down, but for the long-term, the returns on your investments are invisibly, inexorably driven by the underlying value that is created in the offices, cubicles and factory floors all over the world.
To Your Prosperity,

Adapted with permission from BobVeres.com.