The Second Quarter in Review

The stock market rally that began in March 2009 came to an abrupt halt in the second quarter. Despite excellent first quarter corporate earnings in the U.S., investors fretted about larger issues that could overwhelm the economy in the months ahead. These "macro" issues include unsustainable government debt levels in numerous countries, the unwinding of stimulus spending, possible deflation, persistently high unemployment, financial regulation, and a government-orchestrated economic slowdown in China, according to The Wall Street Journal, June 30. These concerns helped send the S&P 500 index to an 11.9% decline in the quarter. 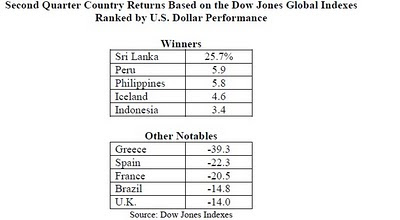 A variety of economic reports over the past few weeks suggest the economy is slowing down. For example, home sales dropped, consumer confidence slumped, manufacturing growth cooled off, and new claims for unemployment insurance remained high, according to Bloomberg, July 3. However, let's not get too carried away. A slowdown does not necessarily mean we are headed for another recession.

Today's weak economy puts policymakers in a tough spot. Normally, fiscal and monetary stimulus is enough to jumpstart growth. Unfortunately, we've shot those two rockets and we still haven't reached escape velocity. If the economy rolls over from here, the question becomes, "Where do we find a third rocket?" According to Tony Crescenzi, strategist and portfolio manager at Pimco, CNBC.com, June 7, our third rocket might consist of time, devaluations, and debt restructurings. If fired, this third rocket could be painful for many Americans.

As the stock market declined, yields on U.S. government securities declined, too, as investors fled to the perceived safety of our government paper. During the quarter, the yield on the 10-year note declined from 3.8% to 3.0%, according to data from Yahoo! Finance. This decline in yield occurred even though the government issued more than $300 billion in new debt during the quarter, according to The Wall Street Journal, July 1. It was a different story in the corporate bond arena. Yields on investment-grade corporate bonds and high-yield corporate (junk) bonds rose as investors began pricing in added economic risk. In a sign of growing risk aversion, the spread between yields on corporate bonds and government bonds rose significantly, as investors required a higher yield to hold the potentially riskier corporate bonds.

Some naysayers think the dollar's days are numbered, but that countdown had yet to begin in the second quarter. The dollar index, a measure of the dollar's strength compared to a trade-weighted basket of six other currencies, rose a solid 5.9% in the second quarter, according to MarketWatch, June 30. Two major trends are apparently tugging at the dollar and in any given week, one trend seems to outweigh the other. The euro zone debt crisis helped spark a flight to the U.S. dollar and was a major reason why the dollar jumped sharply in the second quarter. However, toward the end of the quarter, disappointing economic numbers out of the U.S. and new austerity measures in the euro zone led some investors to rethink their dollar-haven strategy.

The recovery from the recession hit a rough patch in the second quarter as several economic indicators turned soft and the stock market turned south. It's too soon to tell if this is the start of a new leg down or simply a pause that refreshes.

Weekly Focus – Think About It
“Psychology is probably the most important factor in the market--and one that is least understood.”

* The Standard & Poor's 500 (S&P 500) is an unmanaged group of securities considered to be representative of the stock market in general.

* The DJ Global ex US is an unmanaged group of non-U.S. securities designed to reflect the performance of the global equity securities that have readily available prices.
* The 10-year Treasury Note represents debt owed by the United States Treasury to the public. Since the U.S. Government is seen as a risk-free borrower, investors use the 10-year Treasury Note as a benchmark for the long-term bond market.
* Gold represents the London afternoon gold price fix as reported by the London Bullion Market Association.
* The DJ Commodity Index is designed to be a highly liquid and diversified benchmark for the commodity futures market. The Index is composed of futures contracts on 19 physical commodities and was launched on July 14, 1998.
* The DJ Equity All REIT TR Index measures the total return performance of the equity subcategory of the Real Estate Investment Trust (REIT) industry as calculated by Dow Jones.
* This newsletter was prepared by PEAK.
* Yahoo! Finance is the source for any reference to the performance of an index between two specific periods.
* Opinions expressed are subject to change without notice and are not intended as investment advice or to predict future performance.
* Past performance does not guarantee future results.
* You cannot invest directly in an index.
* Consult your financial professional before making any investment decision.