Many investors will be glad to finally see the end of the third quarter of 2015, and most of them will feel like their portfolios are worse off than they actually are. That sound you hear is not just air being let out of the markets; it’s also an end to that optimistic feeling that many people had been cautiously building during the long 6-year bull market that followed the Great Recession. 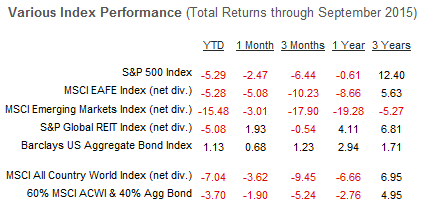 The past three months turned yearly gains into yearly losses almost completely across the board of the investment opportunity set. The Wilshire 5000--the broadest measure of U.S. stocks—fell 6.91% in the third quarter of 2015, posting a total return of -5.79% in the first half of the year. The comparable Russell 3000 index is down 5.45% so far this year, while the widely-quoted S&P 500 index of large company stocks posted a loss of 6.94% in the third quarter, and is now down 6.75% for the year.

Meanwhile, in the global markets, the broad-based EAFE index of companies in developed foreign economies lost 10.75% in dollar terms in the third quarter of the year, for a negative 7.35% return so far this year. In aggregate, European stocks lost 9.07%, and are down 7.33% for the year. Emerging markets stocks of less developed countries, as represented by the EAFE EM index, were down a whopping 18.53% for the quarter, and are down 17.18% for the year.

Looking over the other investment categories, real estate investments, as measured by the Wilshire U.S. REIT index, gained 2.88% for the third quarter, but is still standing at a 3.01% loss for the year. Commodities, as measured by the S&P GSCI index, lost 19.3% in the third quarter, largely due to a fall in oil prices that may be nearing its end. They are down 19.46% this year.

There were many contributors to the loss of confidence in the stock market, and they appear to have been mainly psychological. Analysts blame the Federal Reserve Board for not having raised rates as the so-called “smart money” seems to have expected in September. Why are low rates a bad thing? Because Fed economists seem to believe that the economy has not recovered sufficiently to warrant stopping the central bank’s long-running stimulus program. Who are we investors to argue with the Fed economists?

Except… The explanation for not raising rates had little to do with actual economic activity, which is finally moving ahead, as of the second quarter, at an annualized 3.9% growth rate for U.S. GDP. This is higher than the 3.7% estimate from the Bureau of Economic Analysis, and much higher than the 2% rate that the U.S. economy has experienced since 2009. At the same time, consumer income, wages and salaries, and spending are all increasing modestly, existing home sales are growing at a 6.2% rate over last year, and the unemployment rate, once higher than 10%, has finally dropped down to the 5% range.

The Fed explained that it was delaying its rate rise because the core inflation rate—currently 1.83%, is below the 2% target rate the Fed set back in June 2012. Some people believe low inflation is a GOOD thing, and speculate that the real reason

—and another reason why many investors are nervous about the markets—could be the slower growth of the Chinese economy, coupled with the recent unnerving drop in its stock market. Unfortunately, the Chinese government controls the economic statistics that come out of the world’s second largest economy, which makes it hard to know exactly how fast China is or isn’t growing. But it’s worth noting that stock prices, even after the drop, are still up 31.6% from where they were a year ago.

For the time being, investors will have to continue to accept interest rates at historically low levels. The Bloomberg U.S. Corporate Bond Index now has an effective yield of 3.42%. 30-year Treasuries are yielding 2.87%, down from 3.13% a quarter ago, and 10-year Treasuries currently yield 2.06%, down from 2.36% in June.

When you look at the decline year-to-date, you see relatively small losses. But many investors are remembering that they were 10-15% wealthier just a couple of months ago, measuring their pain from the high point of the various indices. It’s tough to watch your portfolio go down, but it’s also worth remembering that people have been predicting a significant downturn—erroneously—for the better part of six years. Now that the downturn has finally arrived, it hasn’t been terribly painful, mostly giving back gains that were posted in the first two quarters.

The third quarter could be a temporary drawdown that sets the market up for a push back into positive territory by the end of the year, which would give us a record seven years of positive market performance. Or we could see the year end in negative territory, perhaps even giving us the first true bear market (defined as a drop of 20% from the peak) since the Great Recession. We don’t know how the psychology of millions of investors will turn in the next few months, and neither do the smart money analysts who thought that interest rates would be nudged upward by our central bank last month.

We do, however, have confidence that the next bear market will be followed by yet another bullish period that will eventually take us back into record territory, and we’re pretty sure that the markets will punish anyone who tries to outguess their unpredictable behavior in the short term. If you know what the next quarter will bring, please tell us now. Meanwhile, perhaps we should celebrate the fact that we can buy many kinds of investments at cheaper prices than we could just three short months ago. It’s not much, but it’s something to feel good about.

This article adapted with permission from Bob Veres.