The U.S. Debt Ceiling and Possible U.S. Rating Downgrade: What Should Investors Do Now?

As the wrangling continues on Capitol Hill, increasingly  the thought is that the Treasury can manage well through roughly August 10 without a debt-ceiling increase, and even after that time, they can go on for a considerable period without technically defaulting on the debt.


Financial markets are now beginning to price in the likelihood of a U.S. government debt downgrade from AAA to AA+ in the near future, although relatively few think the government will technically default. The credit rating downgrade, however, is believed to be probable. The chances of a ‘grand bargain’ sufficiently large to satisfy Standard and Poor’s appears to be practically negligible.Not only would the federal government’s rating be impacted, but Moody’s has warned that five states are in danger of losing their triple-A ratings as well: Maryland and Virginia (both home to a large number of federal employees) and New Mexico, Tennessee and South Carolina face downgrades because of their heavy reliance on federal revenue.


Moody's added that other institutions would be affected by a U.S. credit rating downgrade, including Fannie Mae, Freddie Mac, the Federal Home Loan Banks and the Federal Farm Credit Banks. As many as 7,000 states and municipalities could feel the impact, as well as foreign bonds that are guaranteed by the U.S. government, such as those of Israel and Egypt.


The Impact of a US Credit Downgrade

While the US may at least temporarily lose it's AAA status, this may be more of a headline the media runs with rather than a great concern to investors. Other countries that in the past have lost their AAA and dropped to AA, such as Canada, Australia and Japan seem to have been only marginally impacted. More importantly, Canada and Australia were able to regain their AAA rating after several years of fiscal discipline.


A key question in many investors’ minds is what impact will a downgrade have on interest rates. Taking Japan as an example, the answer is that a downgrade may have no impact on rates. Indeed, Japan was downgraded by S&P from AAA to AA+ on February 22, 2001 and the 10-yr rate moved 24bps lower the following week.


Similarly when both S&P and Fitch lowered Japan’s credit rating to a AA in November of 2001 the 10-year rate traded relatively flat to lower in the weeks following the downgrades (Chart 2). Ten years have passed since Japan lost its AAA rating and while its 10-year yield still remains close to 1% its currency has not been negatively impacted, but rather it is near the strongest levels of the decade.


Therefore while a credit downgrade would create a long period of uncertainty before all the implications became clear, there is precedent to suggest that rates may be not spike higher as some market participants are expecting and the world’s reserve currency may remain unaffected. 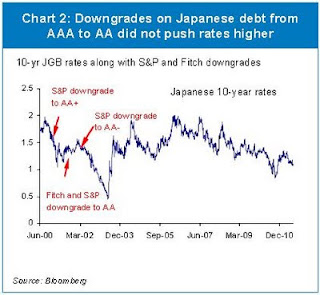 So What Should Investors Do Now?
Uncertainty is never good for markets, business, and thus for the economy. Businesses have reduced spending to maintain high levels of cash. Hiring and capital spending plans are at risk of postponement or cancellation. Consumers and investors are behaving more cautiously as well.

It's important to note that the volatility in the market is for significantly different reasons than that seen in 2008-2009. At that time, global, systemic risk was pervasive and highly uncertain. This time the risk is predominantly because of our political system, often called geopolitical risk. This type of risk is more commonly associated with emerging economies, but sadly it's now forefront in our own back yard.

Yet, while we will likely see continuing high levels of volatility until the issue is resolved for at least some period of time (aka until the next political go-round), this risk is known by market participants and is not global nor systemic to the market.


What is most likely to move markets is how the likely compromise to the debt ceiling is perceived by the market. Markets will assimilate this new information to establish a new equilibrium price, based on the comprise's effects on the US and global economy near and longer term. For instance, severe spending restraints could represent a short-term reduction in demand that can slow economic growth. This could negatively impact equities and be a boon for bonds.


Care will need to be taken in investing new cash or when transferring funds between accounts. Averaging into the market in this case is a sound approach. Rebalancing your account to move equity gains over the last year into bonds is also a good move. However, for any remaining portion of your assets currently invested in the equity markets, leave it there. Trying to time the volatility and predicting what our politicians will ultimately agree to is a loser's game.


In the words of George Costanza...Serenity Now.